When it seems impossible... 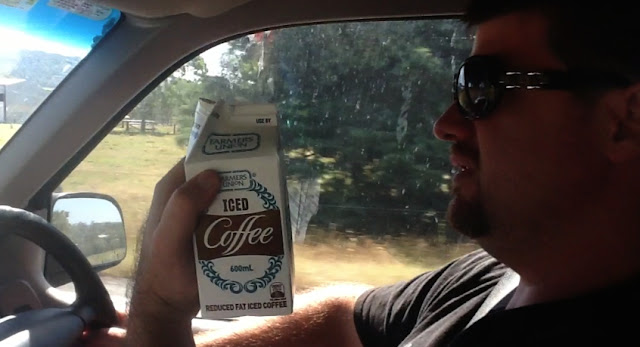 Yesterday we were driving from a friends house in Queensland to my brother's place in Sydney.
We have been traveling kind of the old school way...
with no GPS. ;) So, since we don't have paper maps we have been uploading maps from the free WiFi at McDonalds onto our iPad. It hasn't been the fastest internet and we can't always load the full maps... just the general directions.

Well, yesterday we pulled into a McDonalds and loaded a map... which was pretty much a blue line on a blank map. It had a go right here, make a left there but we were pretty much going blind.

Our road trips are long but fun. We have done 10+ hour drives with the kids most of their lives so we all know what to expect and I'm usually prepared with backpacks full of toys and games. But, things didn't get interesting until we hit the unexpected mountain range near Bald Rock National Park.

Because we were driving blind, we had no idea we were going to go through a range. If we had, we would have made sure to fuel up before trekking through because we know that petrol stations would be few and far between.

We were about 5hrs into our trip when we started to look for petrol stations knowing we were getting low... but as we drove we continued on into this range. The low fuel light went on and we searched harder and Luke drove more steady as to conserve fuel.

There were very small towns along the way but because it was getting late, all of them were closed and pumps were padlocked up. We saw a sign for a town 40km (25mi) and thought we might be pushing the envelope a bit to make it but we'll try. When we got there... CLOSED AND LOCKED with no places to go and ask anyone. We couldn't do anything but hit the road and hope that there was another town in the next 20km... so, we're driving down the road, through the mountains and finally a sign saying the next town was 150km (93mi) away!! There is no way on earth we would make that!! The gas light has been empty and the needle has pretty much been sitting on the bottom with the exception of going uphill a few times where it would hover up a bit... now what??

So, Luke and I tried not to talk about it too much... Joy and Kindi had already expressed their concern a few times. All we could do is pray and be prepared for whats next. So we shared with the kids what was happening (just in case Luke had to walk to go get help) and we all prayed together. We had now shifted into desperation for God...

Putting on some worship music we just sang and asked God to meet us. Then we felt this peace... a BIG peace. All the kids were singing with us and we didn't want the feeling to go away. In fact, I don't even remember looking at the fuel gauge because I was more concerned with losing this incredible feeling of peace. One song just stayed with us forever... we sang over and over again..." I'm not afraid. Show me your glory!"

We just stayed in that presence... worshiped... and prayed... it was AMAZING! We teared up and just saw the beauty in the nature surrounding us and in each other. His glory was there!

Honestly, the next thing we knew we were pulling into the town that had at one point seemed so far away. The first petrol station was closed and then at the other end of town, there was one of the ONLY petrol stations I have ever seen in a small town that had a self serve credit card payment system at the pump. They really don't have those in small Aussie towns! It was literally a miracle!

How amazing is that?!?!! We were/are in shock and awe.

We felt this was significant thing that God did for us at this particular time in our lives. We felt Him say to us that "No matter how impossible things look, I will take care of you". What a powerful word as we look into the impossible situations in our lives. We need to keep our eyes on Him. Like it says in the song:

I long to look on the face of the One that I love
Long to stay in your presence, it's where I belong

Its the place where we belong and He will do the rest. How reassuring and how much peace it brings. When it seems impossible... He can do it.

Jesus looked at them and said,
“With man this is impossible, but with God all things are possible.”
Matthew 19:26