So, taking it back to February or March, our good friend Andrew called to say he was coming through SFO Airport and had a layover for a couple of hours. It had been over 3 years since we had seen him and Luke jumped at the chance to have a coffee with him, even for a short time. They had worked together in Australia for almost 8 years and have a long history together… so it was a wonderful opportunity to catch up.

During that visit of ministry catch up and family reports, Andrew mentioned there was a Seminar happening in July at the Kona, Hawaii campus. Impartation Seminar is designed to 'equip world changers, exploring the Character of God and His interplay of justice and mercy in the transformation of nations. Understanding the God-given domains of authority and spheres of societal influence will be key. Together uncovering the Biblical foundations to build people, build communities, and build nations.'

Having been in the Bay Area for over a year and feeling semi-detached from the broader YWAM family… It became a blip on the radar for a “potential” future plan. And of course who wouldn’t want to go to Hawaii?? ;)

Well, time passed and we felt like this was something that began coming up more and more but with the month to month lifestyle we were/are living, we thought it best to keep it with open hands as to not get disappointed.

When we inquired about the Seminar, we asked if it was possible to only attend a portion of it due to prior commitments. They wrote back and told us that it wasn’t possible and that we would have to attend the full 2 weeks if we’d like to attend. We just chalked it up as a “maybe next year” category. Then a twist, a week or so later they had written back and said they were praying and in that prayer time they felt it was something we were to do. So they granted us a partial attendance (which is unheard of) and said we should apply. We applied and were accepted not too long after. We were also given a discount on our fees… sounds good.

So in the mean time, our 10 year anniversary was fast approaching. My AMAZING mother offered to watch the kids for us while we go. What?!?! That is even more unheard of than a partial attendance. Alone time? For us? What would we do without the army we have in tow… ALWAYS. Well, that would cut our costs down to a third AND it would give us some “romantic” time… whatever that is. ;)

Anyway… so here we are a month out. Then a few weeks out…. AHHH!
What to do…

We just had to lay it down and pray. As we prayed we kept hearing God say that he wanted us to go. So we prayed God’s provision for it and waited.

Then, we actually had people sent us bits of money for Hawaii along with encouraging words… yet, very little money came in for the pressing bills, etc. We were 1 week away and still no airline tickets.

So, we had to lay down Hawaii yet again and prayed. And as we prayed, we heard the familiar words of God saying that he wanted us to go. So we again prayed God’s provision for it and waited. 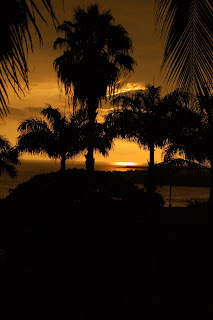 Then, we were given all the money for Hawaii! Amazing!... Yet, no money for the pressing things.  This is it. We hit our deadline, If we were to fly out we needed to do it in 2 days, otherwise we’ve missed it.

We HAD TO pay rent and the bills. So we did, laying down Hawaii and trying to figure out how to communicate to people if we were no longer going. Yet as we prayed, we heard the familiar words of God saying that he wanted us to go. So we again prayed God’s provision for it and waited.

D-Day. Rent Paid. That is a victory in itself! Hawaii was tomorrow or bust. We believed we were going even though it looked impossible. I was the doubting Thomas in this case. I just didn’t want to get disappointed. So, I carried on like it was a normal day and tried to think of a back up plan for a refreshing escape. A good friend of mine and I were talking in the kitchen, Luke emerges out of the office and nonchalantly walks past us and says, “Oh, I bought the tickets to Hawaii.” WHAT?!?! For real??!

At the last minute we were given an incredible gift to pay for the tickets! We were on the next flight to Kona, Hawaii! How did that happen?!

Even in the midst of my doubt and even worse… when I clearly heard God over and over saying he wanted us to go, He still provided! I never felt God’s grace more on this doubting Thomas to not only provide for our financial need but an emotional and spiritual need as well.  Thank you Jesus and all the people he used in the process!!

Humble yourselves, therefore, under God’s mighty hand, that he may lift you up in due time. Cast all your anxiety on him because he cares for you.