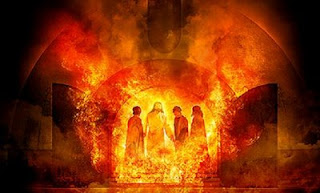 Today as we prayed and waited before God, we we're encouraged and inspired. He gave us these verses...

Shadrach, Meshach and Abednego replied to the king, "O Nebuchadnezzar, we do not need to defend ourselves before you in this matter. If we are thrown into the blazing furnace, the God we serve is able to save us from it, and he will rescue us from your hand, O king. But even if he does not, we want you to know, O king, that we will not serve your gods or worship the image of gold you have set up."
Daniel 3:16-18

Shadrach, Meshach and Abednego knowing that even though they couldn't see the whole picture, whatever the outcome was... it would be for the glory of the God that they knew intimately and loved. Even when facing death, they stood to their convictions. Whether or not God would save them, they knew He would use it to further His kingdom. It didn't matter whether it impacted a nation or just a few people. This testimony would be used regardless and so they stepped out in blind faith, standing only on God's word. Fortunately God's plan was to supernaturally intervened and they were saved!

The impact was probably more than they could have ever imagined. It says in verses 28 and 29: Then Nebuchadnezzar said, "Praise be to the God of Shadrach, Meshach and Abednego, who has sent his angel and rescued his servants! They trusted in him and defied the king's command and were willing to give up their lives rather than serve or worship any god except their own God.
Therefore I decree that the people of any nation or language who say anything against the God of Shadrach, Meshach and Abednego be cut into pieces and their houses be turned into piles of rubble, for no other god can save in this way."

God was glorified! It was for Him and through Him alone that Shadrach, Meshach and Abednego were saved INCLUDING A WHOLE NATION. They were obedient and had their trust only in God. They followed their conviction of what God had spoken and followed it through no matter how they saw it turning out.

When God speaks, we often see all the complications before we see the REAL purpose or outcome.
We have been in that same boat. A lot of our journey here has been on blind faith. We are on a steep learning curve. Its like learning to be a child. To listen, trust and do. Simple yet challenging.

I'm not too sure where your faith is at in this moment in time. You may have a young faith or may be quite mature in it. Whatever the case, God is wanting all of us to know Him and to trust Him in ALL that we do! Be encouraged and make time to meet with Him today. He has a plan...

For I know the plans I have for you," declares the LORD, "plans to prosper you and not to harm you, plans to give you hope and a future.