Rolling, moving and sitting up! 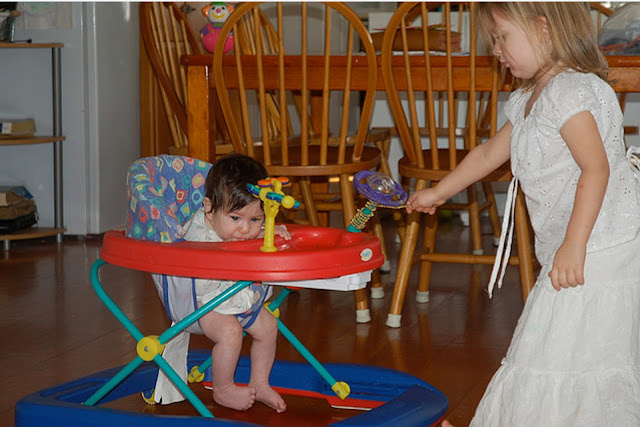 Well, Xavier is now 3 months (nearly 4 months) old. He is a very ambitious little boy. He wants to get in on the action. If he's not in the middle of it all... he cries. He wants to be the center of attention!

He has now started to roll over and not just a single roll but a continuous roll. You put him down and if he wants her will do 3 or 4 rolls to get to where he wants. All with a big smile on his face. She can also scoot/crawl backwards. It won't be long until he's going forward!

He's been frustrated about not being more interactive with the kids so we put him in a walker that is WAY TOO BIG for him and he loves it! The kids push him around in it so he can be in the rooms where they play. He is quickly becoming a toddler before he can even move... why do they want to grow up so fast??

He has even taken to sitting up for short periods of time. We're practicing a little here and there but to be perfectly honest I'm trying to keep him my baby as long as I can! He's my last little baby and I'm taking in every minute.